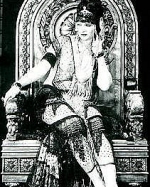 Betty Blythe was an American actress best known for her dramatic roles in exotic silent films such as The Queen of Sheba. Blythe began her stage work in such theatrical pieces as So Long Letty and The Peacock Princess. After touring Europe and the States, she entered films in 1918 at the Vitagraph Studios in Brooklyn, then she was brought to Hollywood’s Fox studio as a replacement for actress Theda Bara. As famous for her revealing costumes as for her dramatic skills, she became a star in such exotic films as The Queen of Sheba, Chu Chin Chow and She. She was also seen to good advantage in less revealing films like Nomads of the North with Lon Chaney and In Hollywood With Potash and Perlmutter both from First National.

Betty Blythe died in Woodland Hills, California in 1972 at the age of 78. She is buried at Forest Lawn Memorial Park in Glendale, California. For her contribution to the motion picture industry, Betty Blythe has a star on the Hollywood Walk of Fame located at 1706 Vine Street.