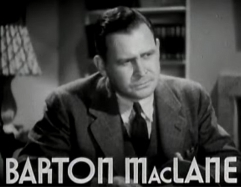 Barton MacLane was an American actor, playwright, and screenwriter. Although he has appeared in many classic films from the 1930s through the 1960s, he was known for his recurring role as General Martin Peterson on the 1960s television comedy series I Dream of Jeannie.

MacLane was born in Columbia, South Carolina, and attended Wesleyan University in Middletown, Connecticut, where he excelled at American football. His first movie role, in The Quarterback, was a result of his ability. He then attended the American Academy of Dramatic Arts.

He made his Broadway stage debut in 1927, playing the assistant district attorney in Bayard Veiller’s The Trial of Mary Dugan. He then performed in the 1928 Broadway production of Gods of the Lighting and was part of the original cast of Subway Express as Officer Mulvaney in 1929. He also appeared in the Marx Brothers’ 1929 film The Cocoanuts.

MacLane made his first credited film appearance in the 1931 romantic drama His Woman. The following year, he wrote the play Rendezvous, which he sold to Arthur Hopkins. The play was performed on Broadway, with MacLane in a featured role.