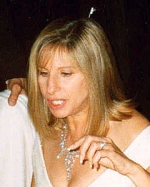 She is one of the most commercially and critically successful entertainers in modern entertainment history, with more than 71.5 million albums shipped in the United States and 140 million albums sold worldwide. She is the best-selling female artist on the Recording Industry Association of America’s Top Selling Artists list, and the only female recording artist in the top ten. Her achievement is all the more remarkable, as she is the only artist who was not a part of the rock and roll genre. Along with Frank Sinatra, Cher, Jamie Foxx and Shirley Jones, she shares the distinction of being awarded an acting Oscar and also recording a number-one single on the U.S. Billboard Hot 100 chart.

Streisand was born to a Jewish family, Emmanuel and Diana Streisand, on April 24, 1942, in Brooklyn, New York. She was the second of three children. Fifteen months later, Emmanuel died of a cerebral hemorrhage and the family went into near-poverty. She attended Erasmus Hall High School in Brooklyn and joined the Freshman Chorus and Choral Club. Streisand became a nightclub singer while in her teens. She wanted to be an actress and appeared in summer stock and in a number of Off-Off-Broadway productions, including Driftwood, with the then-unknown Joan Rivers. Driftwood ran for only six weeks. When her boyfriend, Barry Dennen, helped her create a club act?first performed at The Lion, a popular gay nightclub in Manhattan’s Greenwich Village in 1960?she achieved success as a singer. While singing at The Lion for several weeks, she changed her name to Barbra. One early appearance outside of New York City was at Enrico Banducci?s hungry i nightclub in San Francisco. In 1961, Streisand appeared at the Town and Country nightclub in Winnipeg, Manitoba, Canada, but her appearance was cut short; the club owner did not appreciate her singing style.