Arthur Morton Godfrey was an American radio and television broadcaster and entertainer who was sometimes introduced by his nickname, The Old Redhead. No television personality of the 1950s enjoyed more clout or fame than Godfrey until an on-camera incident undermined his folksy image and triggered a gradual decline; the then-ubiquitous Godfrey helmed two CBS-TV weekly series and a daily 90-minute television mid-morning show through most of the decade but by the early 1960s found himself reduced to hosting an occasional TV special.

Arguably the most prominent of the medium's early master commercial pitchmen, he was strongly identified with many of his many sponsors, especially Chesterfield cigarettes and Lipton Tea. After many years for Chesterfield, he severed the relationship during one of his television programs, when his doctors convinced him that his cancer was due to smoking. Subsequently, he became a prominent spokesman for anti-smoking education.

Godfrey was born in New York City in 1903. His mother, Kathryn Morton Godfrey, was from a well-to-do Oswego, New York, family which disapproved of her marriage to an older Englishman, Arthur Hanbury Godfrey. The senior Godfrey was a sportswriter and considered an expert on surrey and hackney horses, but the advent of the automobile devastated the family's finances. By 1915, when Arthur was 12, the family had moved to Hasbrouck Heights, New Jersey. Arthur, the eldest of five children, tried to help them survive by working before and after school, but at age 14 left home to ease the financial burden on the family. By 15 he was a civilian typist at Camp Merritt, New Jersey and enlisted in the Navy two years later.

Godfrey's father was something of a "free thinker" by the standards of the era. He didn't disdain organized religion but insisted his children explore all faiths before deciding for themselves which to embrace. Their childhood friends included Catholic, Jewish and every kind of Protestant playmates. The senior Godfrey was friends with the Vanderbilts, but was as likely to spend his time talking with the shoeshine man or the hotdog vendor about issues of the day. In the book, Genius in the Family, written about their mother by Godfrey's youngest sister, Dorothy Gene, with the help of their sister, Kathy, it was reported that the angriest they ever saw their father was when a man on the ferry declared the Ku Klux Klan a civic organization vital to the good of the community. They rode the ferry back and forth three times, with their father arguing with the man that the Klan was a bunch of "Blasted, bigoted fools, led 'round by the nose!" 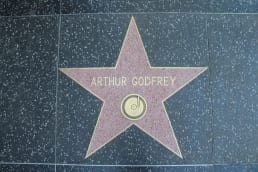