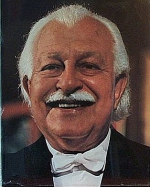 Arthur Fiedler was a long-time conductor of the Boston Pops Orchestra, a symphony orchestra that specializes in popular and light classical music. With a combination of musicianship and showmanship, he made the Boston Pops one of the best-known orchestras in the country. Some people criticized him for over-popularizing music, particularly when adapting popular songs or edited portions of the classical repertoire, but Fiedler kept performances informal and sometimes self-mocking to attract more customers.

Fiedler was born in Boston, Massachusetts. His father was an Austrian-born violinist who played in the Boston Symphony Orchestra, and his mother was a pianist and musician. He grew up in Boston, and attended Boston Latin School until his father retired and they returned to Austria. During 1909, his father took him to Berlin to study violin with Willy Hess. Fiedler returned to Boston at the beginning of World War I. During 1915 he joined the Boston Symphony Orchestra under Karl Muck as a violinist. He also worked as a pianist, organist, and percussionist.

During 1924, Fiedler formed the Boston Sinfonietta, a chamber music orchestra composed of Boston Symphony members, and started a series of free outdoor concerts.