Arlene Francis was an American actress, radio talk show host, and game show panelist. She is known for her long-standing role as a panelist on the television game show What’s My Line?, on which she regularly appeared for 25 years, from 1950 through the mid-1970s.

Francis was born on October 20, 1907 in Boston, Massachusetts, the daughter of Leah and Aram Kazanjian. Her Armenian father was studying art in Paris at age 16 when he learned that both his parents were dead in one of the Hamidian massacres perpetrated by the Ottoman Empire in Anatolia between 1894 and 1896. He immigrated to the United States and became a portrait photographer, opening his own studio in Boston in the early 20th century. Later in life, Kazanjian painted canvases of dogwoods, “rabbits in flight,” and other nature scenes, selling them at auction in New York.

When Francis was seven years old, her father decided that opportunities were greater in New York and moved the family to a flat in Washington Heights, Manhattan. Francis remained a New Yorker until her son moved her to a San Francisco nursing home in 1995.

After attending Finch College, Francis had a broad and varied career as an entertainer. She was an accomplished actress, with 25 Broadway plays to her credit, from La Gringa in 1928 to Don’t Call Back in 1975. She also performed in many local theatre and off-Broadway plays. 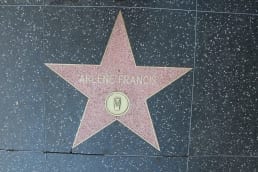