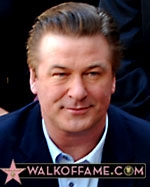 2,433rd Star on the Hollywood Walk of Fame in the Category of Television
at 6352 Hollywood Boulevard in front of BESO Restaurant
on Monday, February 14, 2011

In anticipation of 30 Rock’s 100th episode in Spring 2011, Alec Baldwin, one of Hollywood’s most charismatic and prolific actors—on stage, television and film was shown the love when he was honored with a star on the Hollywood Walk of Fame on Valentine’s Day, February 14th, in front of Beso Restaurant, 6352 Hollywood Boulevard.

Baldwin plays network executive Jack Donaghy on the three-time Emmy Award-winning “30 Rock,” a workplace comedy where the workplace exists behind-the-scenes of a live variety show. The show airs on Thursdays at 10 p.m. ET on NBC and will debut in national syndication this Fall.

Winner of two Emmy Awards, three Golden Globe Awards, five SAG Awards and a Television Critics Association Award for his role, Baldwin has been heralded by Entertainment Weekly as a “comic genius” for his hilarious turn on “30 Rock.”
Baldwin is a native of Massapequa, Long Island, is a graduate of New York University (BFA-Tisch, 94) and was presented with an Honorary Doctorate of Fine Arts from NYU in 2010. He last appeared on stage in the 2010 Guild Hall (East Hampton) production of Peter Shaffer’s “EQUUS,” directed by Tony Walton. Among his many stage credits, Baldwin won acclaim and a Tony nomination for his work opposite Jessica Lange in “A Streetcar Named Desire,” which also garnered him an Emmy nomination for the television adaptation.

Baldwin has appeared in more than 40 films. He garnered raves for his performance in Martin Scorsese’s “The Departed” and a 2004 Academy Award nomination for his role in “The Cooler” opposite William H. Macy. Other film credits include “Beetle Juice,” “Working Girl,” “The Good Shepherd” directed by Robert DeNiro, “Lymelife,” “The Hunt for Red October,” “Miami Blues,” “Prelude To A Kiss,” “Malice,” “The Shadow,” “Glengarry Glen Ross,” “Heaven’s Prisoners,” “Ghosts of Mississippi,” “The Edge,” “Pearl Harbor,” “The Cat in the Hat,” “The Aviator,” and most recently, “It’s Complicated”, opposite Meryl Streep and Steve Martin.

In addition to his many dramatic credits, Baldwin has proven to be an adept and perennial host of “Saturday Night Live” (with 14 hosting appearances to his credit) and was lauded as the “funniest person on TV” in 2006 by the Chicago Sun-Times.
Aside from performing, Baldwin authored the 2009 book, “A Promise to Ourselves” and his production company El Dorado Pictures has produced several projects including the Emmy-nominated miniseries “Nuremberg: Infamy on Trial,” “The Confession” and the feature film “State and Main.”

Baldwin is also a dedicated supporter of numerous causes related to public policy and the arts. He serves on the boards of People For The American Way, The Hampton International Film Festival and Guild Hall of East Hampton. He is an active supporter of The Radiation and Public Health Project, East Hampton Day Care Center, The Actors Fund, The Public Theatre/New York Shakespeare Festival, The Roundabout Theatre, People for the Ethical Treatment of Animals and The Water Keeper Alliance, among many others. 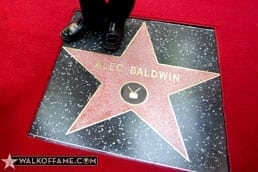