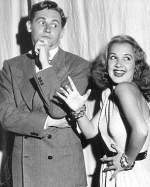 Alan Young is an English-Canadian character actor, best known for his television role in Mister Ed and as the voice of Scrooge McDuck. During the 1940s and 1950s he starred in his own shows on radio and television.

Young was born Angus Young in North Shields, Northumberland, to John Cathcart Young, a shipyard worker, and Florence Pinckney, whose ancestors included a signer of the United States Declaration of Independence. The family moved to Edinburgh when Young was a toddler, and later to West Vancouver, British Columbia, when Young was six years old. He came to love radio when bedridden as a child because of severe asthma. Near the start of his radio career, during World War II, Young attempted to enlist in the Royal Canadian Navy, then the Canadian Army, but was rejected due to his ill health.

Young was a broadcaster for the Canadian Broadcasting Corporation. In 1944, he moved to American radio with The Alan Young Show, NBC’s summer replacement for Eddie Cantor. He switched to ABC two years later, but then returned to NBC. Since 1994, he has played at least eight characters on the popular radio drama Adventures in Odyssey, most notably antique dealer Jack Allen.

Young was featured in the film Chicken Every Sunday in 1949, and the television version of The Alan Young Show began the following year. After its cancellation, Young appeared in films, including Androcles and the Lion and The Time Machine. In 1953, in the movie ‘Kiss Me Kate”, he had a featured, role, as a dancer with Ann Miller, in the major production number, “Tom, Dick or Harry”, in that film. He appeared in the episode “Thin Ice” of the NBC espionage drama Five Fingers, starring David Hedison. He is best known, however, for Mister Ed, a CBS television show which ran from 1961 to 1966. He played the owner of a talking horse that would talk to no one but him.