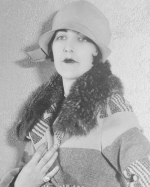 Aileen Pringle was an American stage and film actress during the silent film era.

Born Aileen Bisbee into a prominent and wealthy San Francisco, California family and educated in Europe, Pringle began her acting career shortly after her 1916 marriage to Charles McKenzie Pringle, the son of a wealthy titled British Jamaican landowner and a member of the Privy and Legislative Councils of Jamaica.

One of Pringle’s first high-profile roles was in the Rudolph Valentino film Stolen Moments. Many of Pringle’s early roles were only modestly successful, and she continued to build her career until the early 1920s when she was selected by her friend, the romance novelist Elinor Glyn to star in the 1924 film adaptation of her novel Three Weeks opposite matinee idol Conrad Nagel. The role catapulted Pringle into leading-lady status and her career began to build momentum.

One small set-back occurred on November 15, 1924 when Aileen Pringle was among a select group of Hollywood elites who boarded a yacht in San Pedro, California called The Oneida owned by newspaper scion and billionaire William Randolph Hearst. The event was to be a birthday party organized by Hearst for film producer and director Thomas Ince.