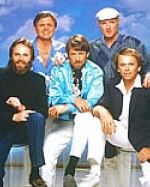 The Beach Boys are an American rock band, formed in 1961, who gained popularity for their close vocal harmonies and lyrics reflecting a Southern California youth culture of cars, surfing, and romance. Brian Wilson's growing creative ambitions later transformed them into a more artistically innovative group that earned critical praise and influenced many later musicians.

The group was initially composed of singer-musician-composer Brian Wilson, his brothers, Carl and Dennis, their cousin Mike Love, and friend Al Jardine. This core quintet was inducted into the Rock and Roll Hall of Fame Class of 1988.

The Beach Boys have often been called "America's Band", and Allmusic has stated that "the band's unerring ability. made them America's first, best rock band." The group has had thirty-six U.S. Top 40 hits and fifty-six Hot 100 hits, including four number-one singles. Rolling Stone magazine listed The Beach Boys as number 12 in the. According to Billboard, in terms of singles and album sales, The Beach Boys are the No.-1-selling American band of all time.

Many changes in both musical styles and personnel have occurred during their career, notably because of Brian Wilson's mental illness and drug use and the deaths of Dennis and Carl Wilson in 1983 and 1998, respectively. Extensive legal battles between members of the group have also played their part. After the death of Carl Wilson, founding member Al Jardine left to pursue a solo career. Currently, the surviving members of The Beach Boys continue to tour in three separate bands: "The Beach Boys Band" with Love, Bruce Johnston, and a rotation of backing musicians; Al Jardine's "Endless Summer Band" with Jardine, his sons, and several former Beach Boys backup musicians; and Brian Wilson with a 10-piece band including members of The Wondermints and Jeff Foskett, who toured with the Beach Boys in the 1980s and 1990s as a backing guitarist/singer.