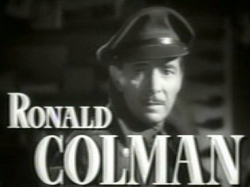 Ronald Charles Colman was an English actor. He was born in Richmond, Surrey, England, the second son and fourth child of Charles Colman and his wife Marjory Read Fraser. His siblings included Eric, Edith, and Marjorie. He was educated at boarding school in Littlehampton, where he discovered he enjoyed acting. He intended to study engineering at Cambridge University, but his father’s sudden death from pneumonia in 1907 made this financially impossible.

He became a well-known amateur actor, and was a member of the West Middlesex Dramatic Society in 1908-9. He made his first appearance on the professional stage in 1914.

After working as a clerk at the British Steamship Company in the City of London, he joined the London Scottish Regiment in 1909 and was among the first of Territorial Army to fight in World War I. During the war, he served with fellow actors Claude Rains, Herbert Marshall, Cedric Hardwicke and Basil Rathbone. On 31 October 1914 at the Battle of Messines Colman was seriously wounded by shrapnel in his ankle, which gave him a limp that he would attempt to hide throughout the rest of his acting career. He was invalided from the service in 1916.

He had sufficiently recovered to appear at the London Coliseum on 19 June 1916, as Rahmat Sheikh in The Maharani of Arakan, with Lena Ashwell; at the Playhouse in December that year as Stephen Weatherbee in Charles Goddard & Paul Dickey’s play The Misleading Lady; at the Court Theatre in March 1917 he played Webber in Partnership and at that theatre the following year appeared in Eugene Brieux’s play, adapted from the French, Damaged Goods; at the Ambassador Theatre in February 1918 he played George Lubin in The Little Brother, and during 1918 toured as David Goldsmith in The Bubble.