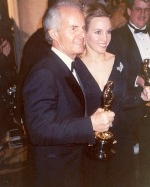 Born in Los Angeles, California, he is the son of Virginia and Darryl F. Zanuck, the famed head of 20th Century Fox. While studying at Stanford University, Richard began his career in the film industry working for the 20th Century Fox story department. In 1959, Zanuck got his first shot at producing when his father installed him as the producer of the film Compulsion. In the 1960s Zanuck became the president of his father’s studio; one year of his tenure, 1967, is chronicled in the John Gregory Dunne book The Studio. Richard was later fired by his father and joined Warner Bros., although Zanuck was eventually fired from there as well. In 1968 he married model and actress Linda Harrison; they later divorced in 1978.

In 1972, Zanuck joined up with David Brown to form an independent production company called Zanuck/Brown Productions. With help from Universal Pictures, the pair produced two of Steven Spielberg’s early films, The Sugarland Express and Jaws. They went on to produce such box office hits as Cocoon and Driving Miss Daisy before dissolving their partnership in 1988. Nevertheless, they were jointly awarded the Irving G. Thalberg Memorial Award by the Academy of Motion Picture Arts and Sciences in 1990. He has worked with Tim Burton six times, producing Planet of the Apes, Big Fish, Charlie and the Chocolate Factory, Sweeney Todd: The Demon Barber of Fleet Street, Alice in Wonderland, and Dark Shadows. He and Burton connected immediately, and Zanuck remains his producer of choice.