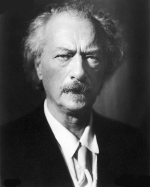 Ignacy Jan Paderewski GBE was a Polish pianist, composer, diplomat, politician, and the third Prime Minister of the Republic of Poland.

From his early childhood, Paderewski was interested in music while living at the private estate near Zhytomyr where he moved with his father. However soon after his father’s arrest in connections with the January Uprising, he was adopted by his aunt. After being released, Paderewski’s father married again and moved to the city of Sudylkov near Shepetovka.

Initially he took piano lessons with a private tutor. At the age of 12, in 1872, he went to Warsaw and was admitted to the Warsaw Conservatorium. After graduating in 1878, he was asked to become a tutor of piano classes at his alma mater, which he accepted. In 1880 Paderewski married Antonina Korsakówna, and soon afterwards, their first child was born. The following year, they discovered that the son was handicapped; soon afterward, Antonina died. Paderewski decided to devote himself to music, and in 1881 he went to Berlin to study music composition with Friedrich Kiel and Heinrich Urban. In 1884 he moved to Vienna, where he was a pupil of Theodor Leschetizky. It was in Vienna that he made his musical debut in 1887. He soon gained great popularity and his subsequent appearances were major successes. His brilliant playing created a furore which reached to almost extravagant lengths of admiration; and his triumphs were repeated in the United States in 1891. His name at once became synonymous with the highest level of piano virtuosity. However, not everyone was impressed. After hearing Paderewski for the first time, Moriz Rosenthal said: “Yes, he plays well, I suppose, but he’s no Paderewski”.