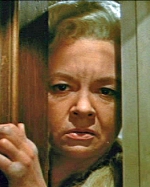 Education:
University of the Pacific in Stockton,CA

Jo Van Fleet was an American theatre and film actress.

Van Fleet established herself as a notable dramatic actress on Broadway over several years, winning a Tony Award in 1954 for her skill in a difficult role, playing an unsympathetic, even abusive character, in Horton Foote’s The Trip to Bountiful with Lillian Gish and Eva Marie Saint.

Her first film role was playing the mother of James Dean’s character in East of Eden. This debut performance earned Van Fleet an Academy Award for Best Supporting Actress. Her subsequent film work was steady through 1960, then very sporadic, and included such films as The Rose Tattoo, I’ll Cry Tomorrow, The King and Four Queens, and Gunfight at the O.K. Corral. In 1958, she was nominated for a Tony Award for Best Performance by a Leading Actress in a Play for her performance in Look Homeward, Angel on Broadway.